The Butcher of Mariupol

The Butcher of Mariupol 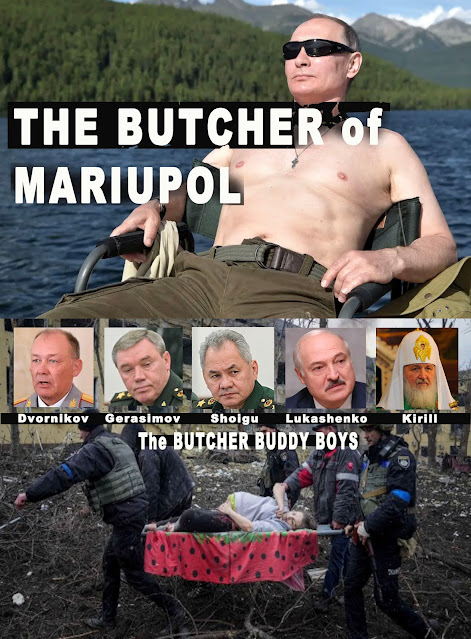 This blog is about Shinto shrines. So why am I writing about Putin's slaughter of Ukrainians? Let me answer this way. Long before I began research and writing about  Shinto, I found a group of knowledgeable people on something called the Shinto Mailing list. This was a place for questions and answers about Shinto and a place to discuss aspects of the religion. At that time, the subject turned to politics and after one heated exchange someone said that politics should not be discussed on the list because it had nothing to do with religion. In rebuttal I said, " When has religion ever been separated from politics." The answer to that question is, of course, never: they have always been joined at the hip. Man is the alpha and the omega. Religions are run by men who take advantage of believers, not to do "God's work" but their own.

The "Butcher of Mariupol" and some of the butcher's buddies would like to paper over every atrocity with vague references to "Nazi", "economics", "Rule of law", or "God". I am writing to clear away some of the smoke: this war is all about one blood thirsty man's endless desire for wealth and power and men with the same ambitions who have thrown in their lot with the monster the world is now stuck with. It will end badly for everyone.

Not only for the unfortunate people of Ukraine who found themselves in the bloodsucker's path, but I predict that Ukraine will also be the graveyard of Russia and Putin will be the headstone. Russia is finished. And yet again, it is her own people who have done her in. Let's briefly review the history.

The vast Imperial Russia was ruled by the corrupt and brutal Romanov's until their own venality caught up to them in the form of severe defeats in external wars and revolution  from within. This revolution was quickly usurped by the Bolsheviks who immediately began killing any of their countryman who opposed them, then turned on each other and never stopped until the Germans were at the door. By this time, Stalin had murdered his way to the top and tried to do a deal with the Nazi's to save his own skin. Of course Hitler was no more trustworthy than the Russians and reneged on the deal. So Stalin was forced to fight to the bitter end. And it would have been the end if not for the Americans and Europeans doing the heavy lifting in destroying the Nazi and the Japanese war machines.

Stalin rewarded these efforts by further brutalizing his own people and refusing to leave the countries of Europe (and part of Japan) which he had "liberated".  Fast forward to the modern era of venal Russian leaders (Kruschov, Breshnev, Andropov, Chernenko). At that time the Russians "saved" Europe by building a wall to keep people from running away from their incarceration and torture paradise. But once again, the Russian "paradise" collapsed under the weight of it's own corruption and brutality – not because it was attacked from the outside.

So now here we are again, after a brief 20 years or so since the age of Gorbachev and lessened Russian demagoguery and violent takeovers of it's neighbors. Again, Russia suppresses opposition at home and inflicts a massive wound not only on a sister country but on itself. Again Russia will destroy herself and enter a dark era for another 20 or 30 years. Not because of NATO, or any attack from a real or fictitious enemy, but by another self-inflicted death blow. And good riddance. Because it must be asked, "What is it in the water that consistently breeds such monsters in Russia?"

Again, I call for the people of Russia to rise up. Throw your bodies in front of the tanks and stop the slaughter before the bombs start to drop on your own heads. Regardless of the cost to Russian lives it must be paid. Why should the birth of yet another Russian monster be charged to the Ukrainians or anyone else when it it the Russian people who must take responsibility for Russian leaders. Is it not that Russians mistrust each other, first and foremost, that finds them unable to band together and overcome one puny dictator after another?

I am well aware that this is an over simplification of history. But the matter is urgent and time is running out for Ukraine and Russia both. The Emperor has no clothes. He can threaten but he cannot poison and arrest everyone. Stand together to defeat the Butcher or be killed separately in your beds as you sleep.