Return of the Black Hundreds

Return of the Black Hundreds 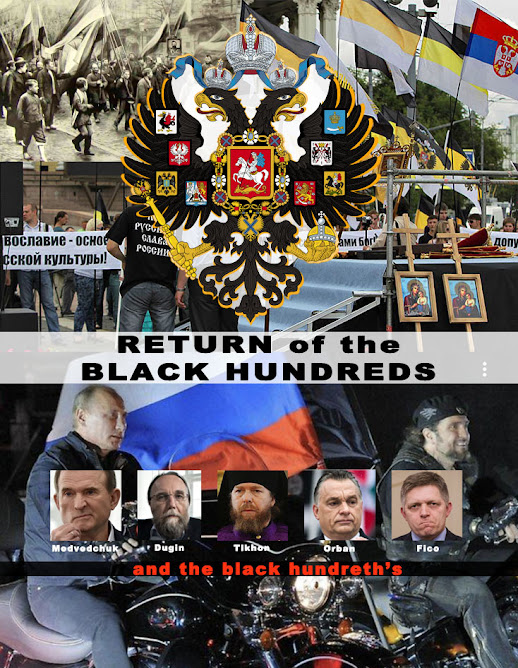 In 2018, with the blessing of the Patriarchate of Constantinople, the
Ukrainian Orthodox Church split from the Russian Orthodox Church. This was inevitable especially after the ROC and it's Putin-lovin' leader, Patriarch Kirill, endorsed the illegal invasion and takeover of Crimea. The ROC is just another arm of the Russian dictator. Church and State are again comfortably ensconced in each other's bosom as they were in the good ole' days of the Tsar and Tsarina. But Kirill and company were very angry about losing control over Ukraine (the third-largest Orthodox community in the world). One more reason for Putin, the self-annotated Emperor of the Orthodox Slavs, to make war.

I don't know how many readers of this blog may still be under the illusion that Russia is a Communist country. Not that the "philosophy" has ever been little more than a thin red veil over the black face of brutal dictatorship, but for several decades now even the veil has fallen. There was a brief time when it was hoped that the face behind the veil would be one of democracy. So much for hopes.

The history of the Black Hundreds reveals the corruption and antisemitism that is endemic to Russian soil. It also hints at how the latest expression of Russian brutality will end: by the massive weight of its own venality.

For those interested in a complete picture, I strongly recommend reading the above linked thesis by  Jacob Langer. Briefly, the Black Hundreds were a loose network of right-wing, monarchists centered on the URP (Union of Russian People) and several other right-wing groups. These groups grew up partially in reaction to the Revolution of 1905 and were financially supported by the Tsar and others who were desperately trying to cling to power. The main activities of these groups consisted of marching with black and yellow flags, beating and vandalizing Jews—the favored target of dictators and their Christian supporters whether portrayed as revolutionaries or gypsies—assassinations and thuggery in support of the Tsar and (more importantly) themselves.

After 1905, by which time Russia had been defeated by Japan in the Russo-Japanese War, and the subsequent mutiny of the Potemkin and the Black Sea Fleet, the Tsar signed the October Manifesto ceding some power to a newly formed legislature (Duma). Men were given the right to vote and some basic freedoms of assembly. But the Tsar reserved veto rights over anything decided by the Duma. He also had the power to dissolve the body—which he did repeatedly. But after World War I broke out in 1914, things went from bad to worse until he abdicated in 1917 and he and his family were slaughtered by the Bolsheviks in 1918. By that time, about 1.7 million Russians had been killed or died in the war.

Through all this, strikes and opposition to the Tsar continued as did the increase in the activities of the Black Hundreds. One of the more relevant aspects of the "movement" to today's environment, was it's staunchly anti-Ukrainian aspect. To quote Langer, "Black Hundred ideology typically denied the ethnic distinctions of Ukrainians and Belorussians, defining both groups as ethnic Russians. Its credo professed a generally derogatory view of Russia’s other ethnic minorities, especially Jews, as well as rebellious nationalities such as Poles and Finns. The Black Hundred also found inspiration in the Pan-Slavs’ visceral opposition to the West. "All this sound familiar?

Fast forward, read this article from 2015 after Putin ordered the assassination (never proven, of course) of his rival, the popular successor of Boris Yeltsin, Boris Nemstov. Here is an extended quote: "Radical nationalism has long been one of the leading threats to Russia’s national security, a danger noted by Putin himself during an appearance on a call-in show last month. Over the past decade several large-scale underground nationalist groups have been crushed by law enforcement authorities. At the same time, the Kremlin has tried to co-opt the nationalists to use them to mobilize the population behind the Ukraine war. They have been allowed to hold large-scale rallies in downtown Moscow and to stage publicity stunts, such as Putin publicly riding with the Nationalist Night Wolves biker gang. Some groups probably quietly receive financial or political support from elements of the leadership." History repeats itself.

What all this has to do with Putin is embodied in the expression "throw it against the wall and see what sticks". Putin has ostensibly become focused on returning Russia to the Great Imperial Motherland that he perceives it to have been when the Romanov's held sway. He rails against the "threat" of NATO (although no NATO country has ever attacked Russia while quite the reverse is true), he makes vague statements about Nazi's (a word to which he gives new meaning), and he rattles the nuclear saber. But the truth is much more frightening and much more simple: like his ideal, Joseph Stalin, he will try anything and stop at nothing in the brutal preservation of himself: Vladimir Vladimirovich Putin.

If you think this is all hyperbole, read the words of a man who knows. Just two interesting quotes here. Speaking of Putin: "The reason he’s doing this is not because of NATO … (or) Ukraine joining the European Union. He is doing this because he needs a war in order to stay popular and stay in power. He has been a dictator for 22 years, he’s stolen an enormous amount of money from the Russian people and, absent the war or some other highly visible way of riling his people into a fervor of patriotism, he would no longer be in power. And so this is his way of staying in power." One more, "The oligarchs aren’t powerful in their own right. Basically, they used to be before Putin. But their role now is to basically provide financial assistance to Putin — to look after his money for him, and to take financial actions as directed by him. And so they’re effectively the financial arm of Vladimir Putin."