From Shinto Shrines: A Guide to the Sacred Sites of Japan's Ancient Religion 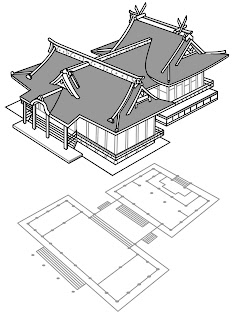 Gongen-zukuri: Also called ishinoma- and yatsumune-zukuri, this style incorporates the honden and haiden under a single, complex roof. The irimoya-zukuri haiden and irimoya- or nagare-zukuri honden are connected by an intermediate space called the ainoma or ishinoma (reflecting its physical form) or heiden (reflecting its use), with the roof ridge of this space running perpendicular to the other roofs so that they form an I or an inverted T shape when viewed from above. (The view depends on the size of the ainoma relative to the other two structures.) The haiden has wings with slightly lower roof heights attached to the left and right sides. A gongen is a Shinto kami considered to be an avatar or manifestation of the Buddha. The style was named for Nikko Toshogu, where Tosho Daigongen (Tokugawa Ieyasu). The Buddhist-influenced structure is usually lacquered inside and out. In the case of Toshogu shrines, the style is highly elaborate, with carvings of fantastic animals and metalwork in copper and gold.

The following styles are primarily associated with the shrine from which they originate. Thus a sumiyoshi-zukuri style will only be found on Sumiyoshi shrines. 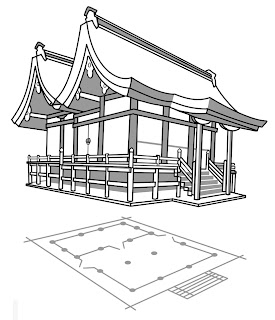 Hachiman-zukuri: A unique style named for the original Usa Jingu Shrine in Kyushu and involving two parallel buildings standing so close to each other that they almost touch along the eaves. A narrow structure connects the buildings and features doors at either end, creating a sort of covered corridor. A large rain gutter runs the length of the roof under the eaves and above the lower roof of the intermediate space. The effect is of one building with a double-gable roof. The roof material is Hinoki Cypress bark, and there are no chigi or katsuogi. The woodwork is lacquered in vermillion, and the walls are white plaster. There are three doors on the entrance side (the non-gabled side of the front structure) and there may be a step canopy that extends over the stairway. The front structure is called the haiden, geden, or gejin (outer sanctuary), and the rear structure is called the honden, naiden, or naijin (inner sanctuary). Hachiman shrines often do not have typical haiden standing in front of the main building. Instead, they usually have a single-bay romon connected to a kairo that surrounds the main building. The romon is where worshippers pray, and it is the face of the shrine with which most people are familiar. Kasuga-zukuri: Named for Kasuga Taisha in Nara, this is generally a small one-by-one-bay honden. The bays are of different dimensions so that the width is about six feet while the depth is about eight and a half feet. The structure has a curving gable roof of cypress bark that features katsuogi and slender, rather curved chigi resembling crossed swords. The entrance is in the center on the gabled (front) side, while a pent roof covers the entrance stairway. The woodwork is lacquered in red with details in black, and the walls are white plaster. The staircase is made of solid square lengths of wood that span the full width of the building, with two square pillars rising from the base of the stair to support the pent roof.

Sumiyoshi-zukuri: This style of honden has a gable roof with the entrance in the center of the gabled side. The structure is two bays wide by four deep. The roofline is flat and has a deep overhang on all four sides. There are katsuogi and very tall chigi. It somewhat resembles the shinmei style but all thesukiden structures 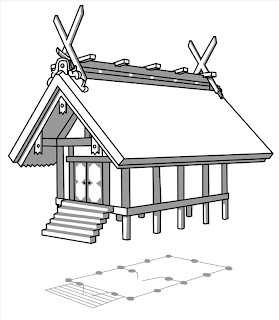