As readers of this blog know I released "Shinto Shrines; A Guide to the Sacred Sites of Japan's Ancient Religion", coauthored with John Dougill and published by the University of Hawaii Press, in December of 2012. The desire to continue my research into shrines led me to launch this blog in August of the same year. In addition to ongoing research, the blog contains excerpts from the book and a number of entries that didn't make it through the final edit. I believe the combination of book and blog presents a comprehensive overview of Japanese shrines in English, unlike that found anywhere else. Whereas much of the blog contents have not been verified with individual shrines—as the contents of the book have—I am rather conservative about including information from unreliable sources. One finds that misinformation is picked up and repeated to such a degree that it becomes perceived as fact. This is especially true in Japanese history/myth and equally true of Internet content. I make every effort not to add to the noise. I have also tried to make available on the blog some of the sources I have consulted in writing the book—particularly where they are readily available on the net—with a summary of each. Please let me know if there is some information related to shrines which you would like to see posted.

Here is a recent review from the website Patheos at http://www.patheos.com/blogs/pagantama/2016/08/28/pagan-shinto-spiritual-book-reviews-august-2016/2/

From the "About" section of the website comes this: Founded in 2008, Patheos.com is the premier online destination to engage in the global dialogue about religion and spirituality and to explore and experience the world's beliefs. Patheos is the website of choice for the millions of people looking for credible and balanced information about religion. Patheos brings together faith communities, academics, and the broader public into a single environment, and is the place where many people turn on a regular basis for insight, inspiration, and stimulating discussion. Patheos is unlike any other religious and spiritual site on the Web today.

The review is reprinted here by permission of the author, Megan Manson — with my thanks! You can read a short interview with Megan here: www.greenshinto.com/wp/2016/09/06/shinto-paganism-megan-manson/ 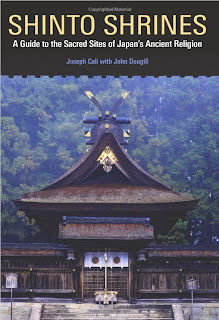 Joseph Cali & John Dougill, Shinto Shrines: A Guide to the Sacred Sites of Japan’s Ancient Religion
(University of Hawai’i Press, 2012)
This book is by two of the most generous and enthusiastic non-Japanese specialists on Shinto. Joseph Cali is the creator of Shinto Shrines of Japan Blog Guide, a very useful website for those looking for information about specific jinja (Shinto shrines). John Dougill is the author of Green Shinto, which I consider an essential resource for international followers of Shinto and especially those approaching Shinto from a Neopagan perspective. I’ve therefore had Shinto Shrines: A Guide to the Sacred Sites of Japan’s Ancient Religion on my wishlist for some time, and I’m really glad I’ve finally got to read it. I was not disappointed.
Booksellers would not be wrong for putting Shinto Shrines in their “Travel” section. It looks and feels very much like a Lonely Planet-style guidebook – one that covers, in considerable detail, 57 prominent jinja (shrines) located all over Japan. Like a Lonely Planet book, Shinto Shrines is packed with full-colour photographs and the entries for each shrine all feature a table of useful information.
What makes Shinto Shrines stand out from Lonely Planet, and in fact many other books on Shinto, is the attention given to details about the shrines – there’s information here that you just won’t find elsewhere, at least in English. The key information about each shrine not only includes its contact details, but also information on which kami are enshrined there, what kind of prayers are usually offered, and key dates in the shrine’s calendar. Perhaps the most attention is given to the shrine’s architectural features, so if that interests you in particular you’ll be in heaven (and if you don’t, you can just skim-read these parts). This, coupled with the excellent introduction to Shinto (with some really helpful illustrations) at the beginning, means that Shinto Shrines transcends being a mere travel guide and is in fact a solid resource for more serious students of the Shinto religion and its shrines.
Friendly, detailed and clearly written with a lot of love, Shinto Shrines is a reference book for a new generation of Japanologists and other enthusiasts of Japan and Shinto – those who are not content with simple armchair research, and want to go out there and experience Shinto for themselves.

Posted by Joseph Cali at 7:08 PM No comments: