In Shinto Shrines: A Guide to the Sacred Sites of Japan's Ancient Religion, my focus was on delivering as much information as possible about as many shrines as possible. The original goal was 100 shrines but this would have necessitated a massive book at a massive price (as well as an irate publisher). Since I was unwilling to compromise the information for each shrine, I compromised on the number of photos. In this blog too, I have followed the style of the book and therefore images are again minimal. But in the assumption that readers of the book and of this blog might also be interested in seeing more of the places being written about, I am presenting a series of Photo Tours.  Here then is the principle shrine of the kami often referred to as the "God of War":Hachiman.
Hachiman shrines are one of the most numerous types, having 30,000 individual shrines by some reckonings. This is likely an inflated figure given that the total number of shrines in the country is said to number about 80,000. However there is little doubt that Hachiman is one of the most common shrines, and Usa in Oita province, Kyushu, is probably where the cult began. Hachiman is an extremely interesting and thoroughly combinatory kami containing distinct Buddhist elements and origins. 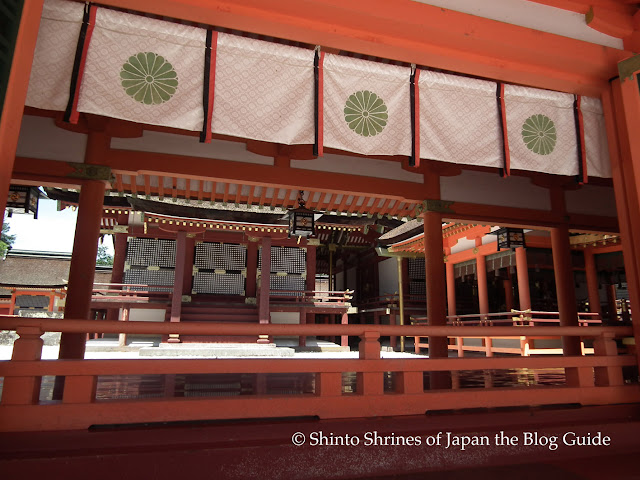 Hachiman is itself a combination of Emperor Ojin, Himegami (a consort kami which varies according to the shrine but is here considered to be the three female Munakata deities), and Jingu Kogo. This is why there are three individual buildings. These are enclosed within a kairo covered walkway with a two-tiered roumon entrance. It is the roumon and kairo painted in cinnabar that represent the Hachiman style to most visitors. The same style can be seen at Tsurugaoka Hachimangu in Kamakura and others. What is not so apparent is the double gable roof which is even more indicative of the style though, in fact, the double gable is now to be seen in only four Hachiman shrines that I know of. Not all Hachiman shrines have three deities or three buildings either. Some enshrine Ojin alone and some Ojin and Jingu who are child and mother. Some include Ojin's sons. 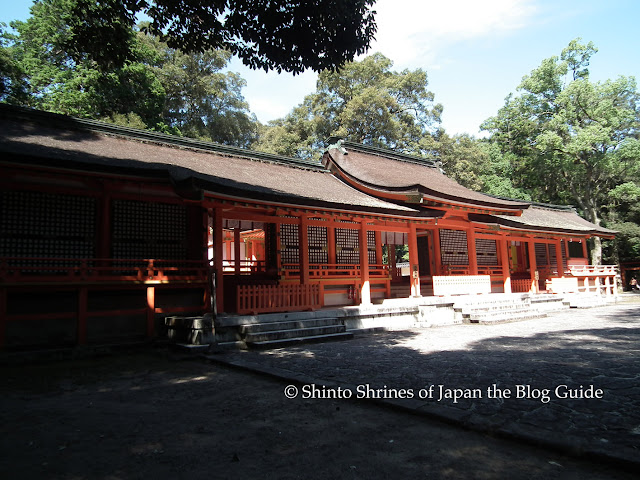 While the grounds of the shrine are extensive and the structures number more than 20, the two principle groupings are the jogu (at the top of the page) and the gegu. Although the terminology is slightly different, as with Ise Jingu, the kami of the gegu are said to provide food to the kami of the jogu. Interestingly, I have been told that the gegu (or in the case of Ise, the geku) was likely built before the jogu (or in the case of Ise again, the naiku) since a place to prepare food offerings would be needed before the principle kami could be enshrined. The structure is similar to that of the main shrine except that the kairo does not surround the entire compound, there is no roumon, and the three individual shrines within do not sport a double gable as can be seen clearly from the right side photo.

Another distinctive structure at Usa is this covered bridge called the kurehashi which is thought to exist since the thirteenth century. It is one of several bridges that cross the Yorimo River bordering the shrine grounds. The ceremonial bridge is used only once every ten years when an imperial messenger, bearing offerings from the Emperor, crosses it. Modifications have been made over the years, such as the closed gate and the concrete pilings. Such a long covered bridge is quite rare in Japan and I would love to hear from readers if anyone is aware of any others.

Posted by Joseph Cali at 3:17 PM No comments: